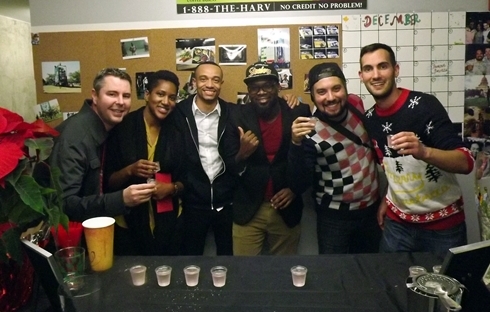 Last week Shaken Not Stirred provided bar catering at two separate company holiday parties in Culver City. It’s funny that both companies seemed to be closed related as to what they did – all things digital, had similar guests, and were less than a mile from each other. These were the first parties I have bartended at in Culver City since being in business.

On Thursday it was raining throughout Los Angeles, and we all know what that means – horrible traffic and massive delays. In Culver City it was even worse. I got down into the area way early and I worked out at LA Fitness. I finished my workout two hours before I was supposed to arrive at the party. My GPS said I was 2.2 miles away from the location. It took me ONE HOUR to drive 2.2 miles in Culver City traffic. On top of that my phone was about to die and my car charger wasn’t working. I was sweating, thinking that is my phone died, I would not know the address, contacts phone numbers or anything. I finally made it to the location and my phone died minutes later. The moral of this story is that I must keep a printed map of the location, directions, and contact phone numbers on all jobs.

Randy Rollog (310) 621-3051 provided DJ service for the Thursday night event. He played Christmas music and then slowly switched it up to hip hop. He has a good setup, and I hope I can toss some business his way. I have been looking for a reliable DJ I can work with.

The second night, Friday, I had the larger of the two holiday parties in Culver City. I brought another bartender with me and we set up two bars – one outside the location and one inside the kitchen at the facility. I manned the outside bar where they had the stage setup for a live band. The other bartender held down the fort in side. We served over 100 guests. The Goldsoundz provided the live music, including classic and alternative rock. They had two food trucks doing the catering, but I was too busy to get their information

These two holiday parties were some of the last of the holiday season. The next night I provided bar catering at a December wedding in Northridge. I have a Christmas party in LA Canada later this week, and then a New Year’s Eve party, and a New Year’s day party, and then the holiday season will be officially over. Please follow Shaken Not Stirred on Facebook if you haven’t done so already.

Yesterday Shaken Not Stirred returned to the Diamond Bar Center for the largest wedding they have done to date. We had three bartenders and three bars to service 350 people. I always allow myself one hour set up time, but I arrived two hours early, because this kind of event requires a lot of preparation. I was very nervous when I first arrived that something was going to go wrong, and that is why arriving early is so important, because it gives you time to fix any potential problems.

The Diamond Bar Center has two portable bars and we used those, plus I set up my portable bar. We had approximately 400 pounds of ice and that seemed to be just enough on a 95 degree day. When we looked at the liquor stock and cups we were panicking that it wouldn’t be enough. Well, it was pretty hard drinking crowd and it ended up being just enough. We ran completely out of everything but wine, one half hour before we were supposed to stop serving.

I had me two best girls, Mia and Kelley working with me and they did a stellar job. I was very proud how we all came together and pulled this massive event off. I was thinking when I arrived I don’t want to do any more events this big, but I have since changed my mind about that. It was a great experience.

This Saturday I will be bartending a wedding party in Culver City and will be taking another bartender and two cocktail servers with me. Then on Sunday, I will stay in the San Fernando Valley and bartend a baptism party in Tarzana. Later this month, I will return to Coachella to bartend a wedding, and then have another wedding to bartend in Northridge on Halloween night. I still have the Friday before Halloween available if anyone wants to do a Halloween party on that night.